On the last Wednesday of October, Drew and I decided to go on a spooky date night! Neither of us had ever been on the Ghost Walk Tour in downtown Niagara On The Lake before, Drew had never been on a haunted tour ever so it was a new experience for both of us and it was definitely an amazing one. * NOTE: I did have a few pictures from this night but they either turned out too dark, or too blurry, I might try to filter some and put them on insta but I can’t promise that I’ll be able to fix them! * 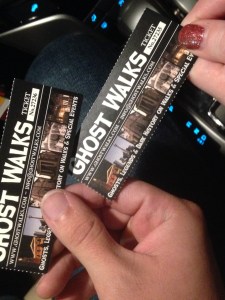 It was a 90 minute tour and it was actually super affordable in my opinion. The tourists were split into two small groups so it was a bit more intimate and we were able to talk and participate in the tour. The tour guide, Sir Bob was delightful and super entertaining. If you ever get a chance to do these tours, try to get a tour with him, he was seriously the best.

Drew and I both loved the historical parts of the tour, learning about what happened to make Niagara On The Lake the most haunted town in all of Canada. We got to walk through the creepy dark and lonely streets full of old houses, and were able to learn a lot about the different buildings that were there before they burnt it all to ground.

During the last half of our tour we were down near a gazebo that had been used in an old horror film, and our guide informed us that there was a cat that usually joined him for the last half of our walk and sure enough, we were definitely greeted by one of the most enthusiastic cats I’ve ever met. I mentioned it to Drew, and though he didn’t notice, something seemed very strange about the cat, it didn’t walk like a normal cat, and it would literally run to keep up with us if we left without him. It was probably just my imagination but it just felt a bit spooky, and I love kitties!

Overall, 10/10 for the Niagara on the Lake Ghost Walks. If you are looking for quality tours of haunted landmarks, check out their site, they do them in a number of cities and towns and you should totally see if they do any near you. 100% worth the trip! Seriously, on our tour, there were 4 people from out of town that had come just for the ghost walk! That’s how good it was. In October they were doing them every weeknight, so I’m not sure how often they do them every other month but definitely, check it out and see! I’ve been raving about it ever since, and I’ve been trying to find the time to do one of their other tours in other cities as well! If I get to do any other ones I’ll definitely post about them!

Processing time: The time I need to prepare an order for shipping varies. For details, see individual items. Customs and import taxes: Buyers are responsible for any customs and import taxes that may apply. I'm not responsible for delays due to customs. *** I don't accept returns, exchanges or cancellations*** But please contact me if you have any problems with your order. Dismiss